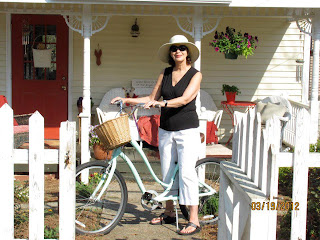 Tears were rolling down my cheeks as I was driving away from my mother’s house. My heart was deeply touched when the realization hit me that my mother lives in the ghetto. But the difference between my mother, and others that live in the ghetto, is that she lives there by choice. She had previously lived in an upscale home in a prestigious community until she heard the voice of the Lord nudging her to move to the small town of Hogansville, Georgia to plant a mission church with her husband. About 12 years ago, she followed Christ's leading, sold her home, left upper middle class suburbia, and moved to a tiny house in a mill village that was built around the turn of the 19th century.

I clearly remember the first time I saw the neighborhood. I had never seen anything quite like it, and neither had some of my other family members. My brother’s humor lightened our shocked state the first time we visited the new place that my mom called "home." He said, “This reminds me of Archie Bunker’s neighborhood.” We had a good laugh, but the truth of the matter is Archie Bunker’s neighborhood (in the 1970’s sitcom) was much nicer. During one of our first visits there, my daughter asked me, "Why are there dishwashers and furniture in some of the yards of this neighborhood?" As inquisitive as we were, I knew in my heart, this was where God had called my mother to live.

Seeing the elegantly dressed, middle class woman in an impoverished area may have seemed odd to some people. But for me, as her daughter, I could see that the place she had chosen to move to, fit perfectly with her Christ-like heart. She had found her mission field right here in America , in a community filled with people in great need of God’s grace and love. This is what defines my mother: her gift for sharing Christ’s mercy with the poor in spirit and brokenhearted.

I could fill a book with many examples of how I have seen Christ’s light shine through my mother, but there is one that has impacted my life the most. Shortly after my 13th birthday, my father told me that he didn't love my mother anymore and he was leaving. I have the memory etched in my mind of my mother sitting at the table weeping as she read her Bible. She had just heard my father’s words of rejection. Her college sweetheart, whom she was married to for 17 years, was divorcing her, piercing her heart. Shortly after the divorce, my father remarried another woman. My heart was crushed, so I can only imagine the depth of pain my mother was experiencing. Yet in the midst of her grieving, she continued to exemplify the amazing grace of God.

My mother never spoke any unkind words about my father, and she lived out what it means to forgive the way our heavenly Father forgives. Her loving attitude revealed the heart of Christ. She told me that we needed to pray for my father. We began praying that he would surrender his life to Jesus. She continually showed love and kindness to my father and his new wife. My mother’s life was building tremendous faith in my teenage heart as I watched her faithfulness. In the midst of my broken life, I saw a miracle come forth. A little over four years later, my father radically surrendered his heart to Christ. At seventeen years old, it was a blessing to have spiritual eyes to see that the merciful love of Christ displayed through my mother had drawn my father to the Lord.

Over a decade later, while my mother was recovering from cancer, my father shared with me the true impact my mother’s love and forgiveness had made on his life. What I had discerned in my spirit, my father’s words confirmed. He began telling me that the most significant factor leading him to a fulfilled life in Christ was experiencing the unconditional, Christ-like love of my mother. It was beautiful, hearing with my ears what I had known in my heart for many years.

The Lord honored my mother by bringing her a wonderful, Christian man to marry several years after my father remarried. My mother’s life is a beautiful picture of how the Lord is able to take a devastating situation and use it for good (Romans 8:28). But most of all, her life is a true example of Christ’s mercy and kindness. The Lord had a good plan when He placed her in a neighborhood where there is poverty, drug addiction, and homeless people. These people are the ones that need to see grace the most.

I have often shared stories about the grace I've seen in my mother and I've told friends that the perfect name for her would be, "Grace." I even wrote a poem about the grace displayed in her life and titled it, "Her Name Should be Grace." I had never asked my mom the meaning of her name. But on the day I presented her with the special poem, she looked at me with joy, and said, "That’s what my name means: GRACE."

I love you, Mama! Thank you for being the living example of Christ's love. You will have an abundance of crowns in heaven. Happy 71st birthday!


This was originally written in 2008. Today, I have revised it in honor of my mother's birthday.
Posted by Amy Lynne at 9:02 PM